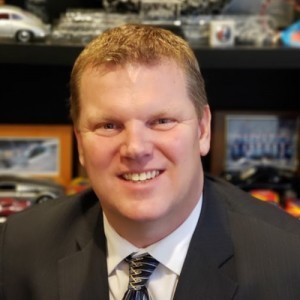 Jeff’s a car guy… which explains all those diecast models in his office. He’s also the founder of the Kansas City Automotive Museum and serves on the board of directors for this new non-profit automotive history museum in Kansas City.

But, if you ask Jeff what his favorite car is, he won’t mention exotic or expensive. Instead, he’ll say, “I would love to have the 1938 Ford coupe my dad drove as a professional dirt track racer in the 1950s. My grandfather’s garage sponsored dad’s race car. If I could track down that car, it would be a great connection to both of them. They’ve both been gone a long time.”

A retired Navy Flyer, Desert Storm veteran and former commanding officer of several units, Jeff was multiple awards during his service. While in the Navy, in San Diego, he met his beautiful wife, Pilar. “She was a student planning on going home to Spain after finishing her undergraduate degree,” Jeff told us, “but I talked her into coming with me back home to Kansas City.”

With hard work, Jeff was able to go to college at MIZZOU and law school at UMKC (University of Missouri-Kansas City). He gives a lot of the credit for his success to his mom, “my mom is an amazing person, I don’t know how she made it through everything she has and still managed to send three of her four kids to college.”

Jeff’s love of that 1938 Ford demonstrates why it is important to him that his clients have a good estate plan. Jeff talks about that car as a connection to his father and grandfather who shaped his life. He understands that the legacy we leave behind is far more than just the stuff that our loved ones pack up and carry out of our houses when we are done. Our legacy is the connection we have and the impression we leave on those we care about. The “what” of our legacy is important, but the “who” is paramount. Jeff woks to make sure the “what” and the “who” are both represented in your estate plan.

Jeff knows that two of the biggest hurdles to a good estate plan are: (1) fear of the expense and (2) fear that it will be difficult and time consuming. “Our firm has realized that neither of those should deprive someone from the protection of an estate plan,” Jeff said. “We offer flat fees with affordable payments to overcome the first hurdle, and our process lets you sit down with a lawyer for a first workup without bringing anything but you. All you have to do is call us, we are here to help.”